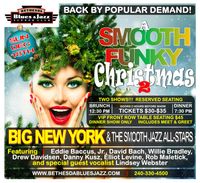 Christian “Big New York” de Mesones has been playing bass guitar for over 30 years. He was only 18 years old when he graduated from the world famous Bass Institute of Technology (now the Musician’s Institute) in Hollywood, California where he had the opportunity to study and workshop with greats such as Abe Laboriel, Louis Johnson, Tim Bogart, Howard Alden, Steve Morse, Pat Metheny, and the late Tommy Tedesco and Ray Brown. By personal request from visiting guitar faculty member and legendary jazz guitarist Pat Martino, he performed an original composition for his graduation ceremony.